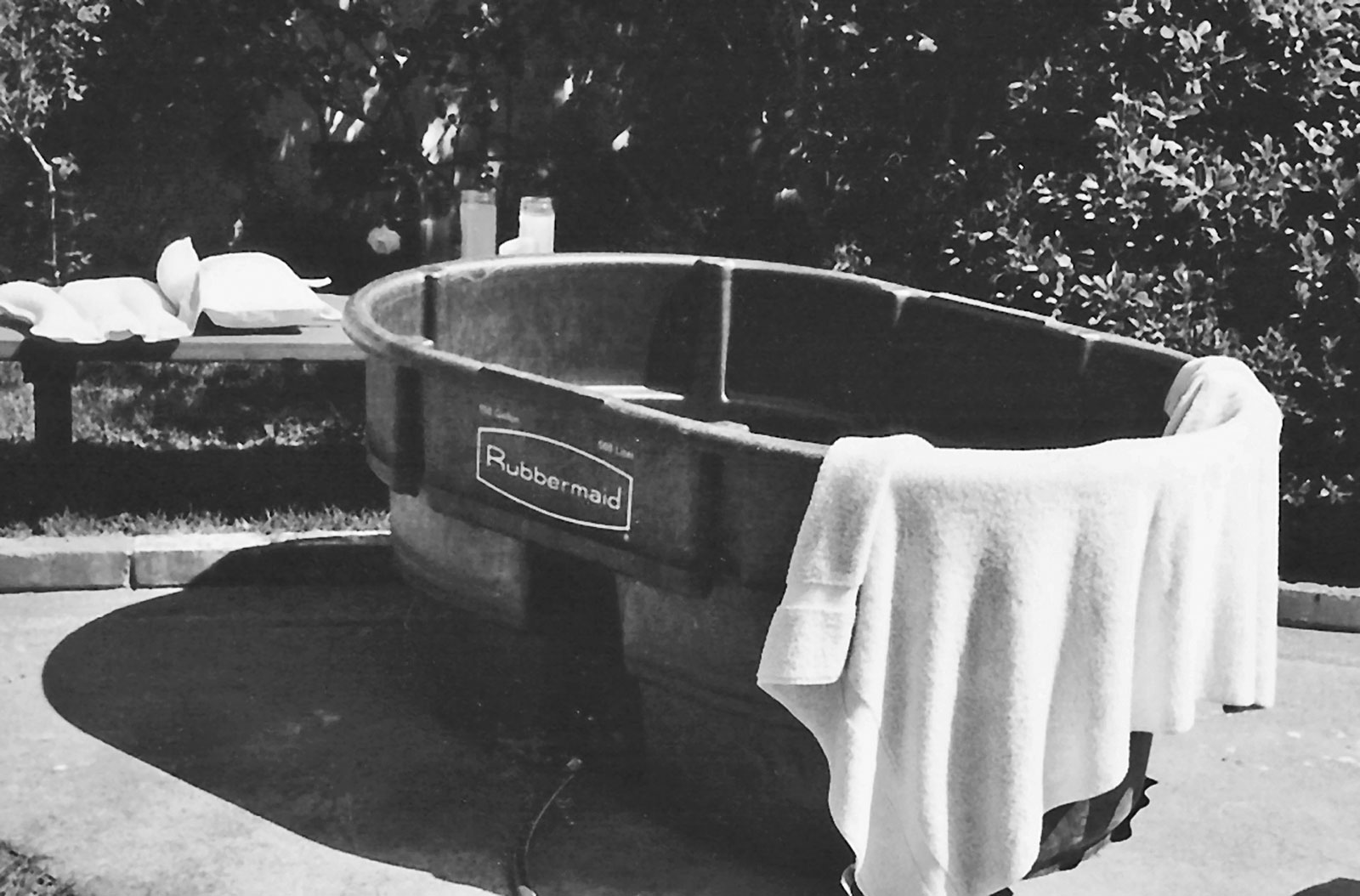 Thirteen years ago my wife and I were blessed with a perfect home waterbirth. During the early months leading up to the birth, I would have been the last one to predict that our son would be born by candlelight in our backyard horse trough on a warm night in September as I enjoyed an ice cold Corona while sitting just outside the “birth tub.” Now that’s the way to do it!

At the beginning of Teresa’s pregnancy when she said she wanted a homebirth, I had to be convinced. This is a father’s story about how I became convinced and about some of the serious (but silly) concerns that can preoccupy a typical male’s mind while the female is having a giant estrogen jam-session of birthing. In other words, “Help, I’m a guy!”

“How am I going to explain a homebirth to Mom?”

Once we found out Teresa was pregnant, she made a great case for a homebirth. She armed herself with facts that I couldn’t refute. Actually, I had no passion for even trying to refute them because I’ve always had a healthy (no pun intended) skepticism about hospitals anyway. Guys will usually concede to a woman’s point-of-view if they can just see the sense of it. But what was my mother going to say about all this? It was important to me that Mom didn’t think my wife and I were nuts. It helped our case that both Mom and Dad were homebirth babies born in the 1910s, but it was mostly Teresa’s knowledge and confidence that convinced them we knew what we were doing and that their first and only grandchild would be born safely.

“Hey, what about my issues? Do they count?”

Affording a midwife was never going to be a problem, but I did have two reasonable concerns. The first was that we were failing to take advantage of a health care system that we were paying for—one that could serve us well in an emergency. The midwife reminded me our house was exactly three minutes from the hospital, and we had enough time to make use of it and get there if an emergency occurred. Without that reassurance of an emergency plan and a hospital, I would have been far more reluctant and worried.

The second issue was a bigger one for me personally, and it involved cords around the neck. I have a bit of a phobia about neckwear, hoodies, men’s ties and any number of things that can choke someone to death. Our midwife noticed that while I was trying to articulate this fear, I was getting worked up. “Look,” she reassured me with a tremendous sense of confidence, “Your baby is going to be fine and you’re going to have a safe, wonderful birth.” I knew that nobody could make such a guarantee, but I believed her anyway. It was really the one thing I had wanted to hear from someone all along. Once she said it out loud, I was totally on board. I stopped being worried.

“So are we going to use the hospital’s services at all?”

Throughout Teresa’s entire pregnancy, the one thing that most annoyed me happened at a group prenatal orientation I didn’t even attend. Teresa came home saying the nurses had double-teamed her, hurling a heap of value judgments onto her the moment she told them we were planning a homebirth. They wanted her to drop the idea. “Geez, the gall of these folks,” I said. “We’re shelling out an extra $2500 for a midwife, so we’re probably saving this hospital 10,000 bucks, and they’ve got the nerve to pressure you? We’re paying for this kind of service?!” It was insulting.

So I went with Teresa to the next prenatal appointment just to gripe out loud about the way they treated her. This time we got lucky because our nurse practitioner confessed that she was also a certified midwife who simply was not practicing at the time. She was cool—we liked her, and she liked our birth plan. She made what I thought was a very clever suggestion, which was to game the system. “Take advantage of any of the hospital’s prenatal services that you might want, but don’t mention your homebirth plan. Then, when the time comes, just don’t show up—don’t come to the hospital. Stay home and have the birth you want.”

This made sense. We could have everything modern medicine has to offer, but at our choosing. If we didn’t want something, we could just blow it off. So we took the nurse’s advice and played along. We stopped mentioning homebirth. That allowed Teresa more control of her own pregnancy and ended a lot of anxiety (for me at least) that the hospital itself had created.

“This seems so normal. What was I worried about?”

When our son was born, I had my chin right over Teresa’s left shoulder. I came as close as a guy can come to having her angle of view and, yes, I had a Corona in my right hand. It turned out that the cord was indeed wrapped around my son’s neck. The midwife quietly explained that she was unwrapping it right then. After all of my original worrying, the issue was resolved in a few seconds while she gave me the play-by-play just like a sportscaster.

Seeing my son pop up out of the water with a look of surprise was perhaps the greatest single second of my life. It wasn’t nine months of carrying and a lifetime of bonding, but rather a singular spectacular moment. During that moment the two things most on my mind were the sheer curiosity of what our son looked like and whether he was healthy. Teresa says that she remembers almost nothing about the moment of birth, but I can replay it in my mind anytime I want.

“Can I have a beer while I’m bonding?”

Physical bonding and skin-to-skin contact wasn’t a big desire with me right then. After the midwife left, we got some needed sleep, and then we called all the grandparents to come over. Later in the day, after we were alone again, Teresa got up and took the baby into our bedroom and shut the door behind her. That’s when I started to feel left out, even a bit angry, as I straightened up around the house. I didn’t want to be naked in the tub with them during the birth or anything, but neither did I want to be alone in the living room watching TV afterwards. That’s when something much more important struck me.

For a mother, the moment of birth begins a long, slow lifetime of separating, where the child will eventually grow up and become an individual with his own characteristics and aspirations. However ironic it may seem, I see mother/child bonding as an important first part of that long, slow separation. It makes sense that her need for immediate skin-to-skin bonding is so strong.

For a guy, the moment of birth begins a different lifetime of having this little thing latch onto you and join you in every part of your life for a good, long while. Guys generally want to prepare their kids to go off and eventually fend for themselves. I’m not sure whether we need to bond so much—I mean immediately after a birth. I think eventually, however, that urge comes on strong. Expect it.

The day after our son’s birth we got a call from the hospital reminding Teresa that she had a prenatal appointment scheduled for later that morning. “She’s right here holding the baby,” said my stepson, “I’ll hand her the phone.” We deliberately forgot to tell them that we intended to be no-shows. “So does that mean you won’t need to reschedule your appointment?”

I cleaned out the horse trough and my stepson helped me get it into the truck. A young couple expecting later that week was scheduled to get our loaner tub next. After the expectant father and I carried it into their house, I handed him a “day old” bread sticker that he could put on their baby upon arrival and told him, “You’re going to have a safe, wonderful birth.” As a fellow guy, I just thought he might want the reassurance.

Ken Magri is a retired art history professor and a Harley-Davidson historian, and spends time at his cabin in the Sierras. He writes about cannabis and contemporary culture for Sacramento publications. Ken’s wife is a doula, his son was born at home, and he is a supporter of modern midwifery.

View all posts by Ken Magri

After Action Review: A Guide for Midwifery Students and Preceptors