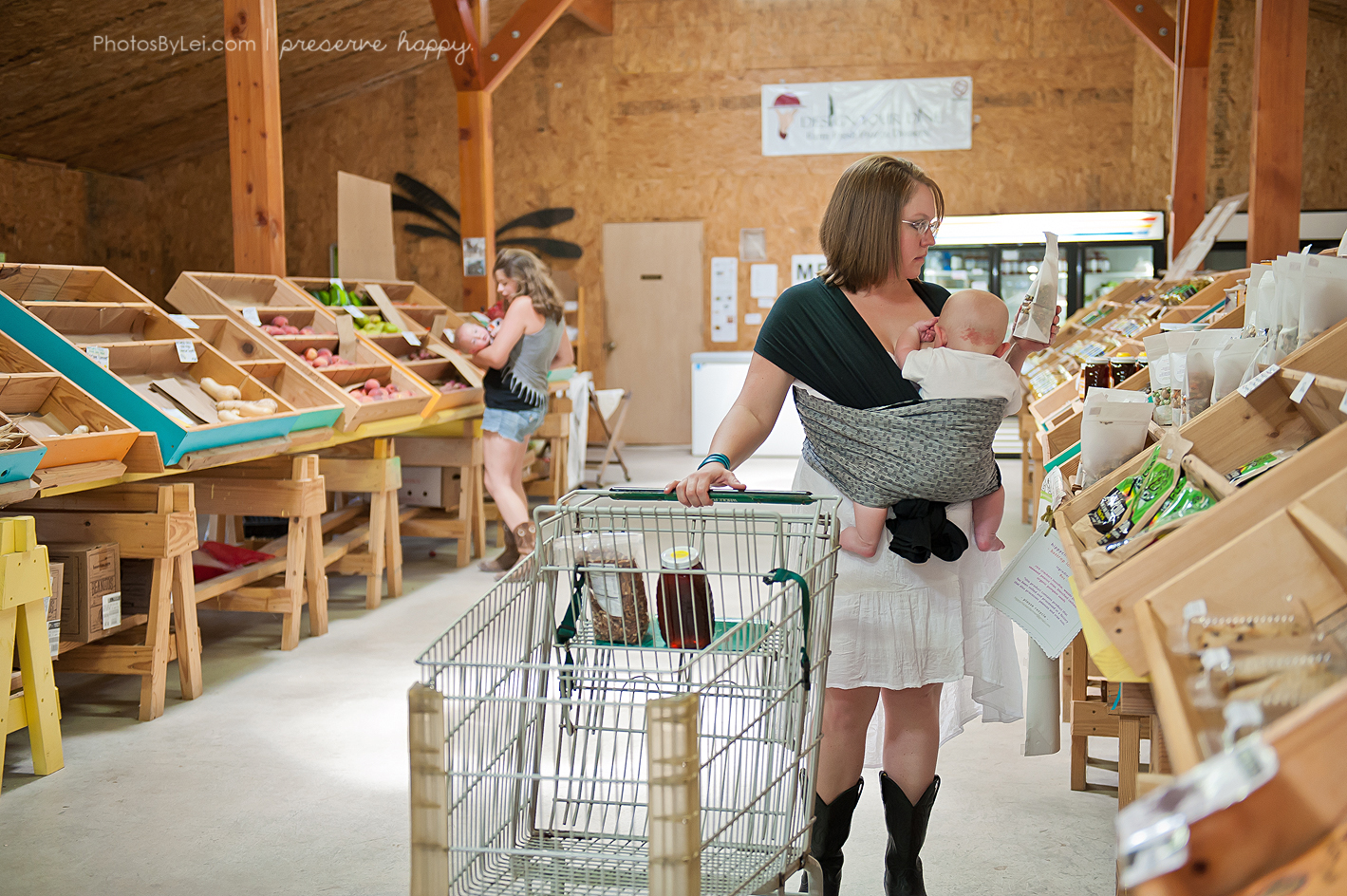 All photos by Leilani Rogers—photosbylei.com

As a birth photographer, I often get the privilege of capturing the beginning of a mother and baby’s breastfeeding journey. When this happens, I’m reminded of my own breastfeeding experiences. Having breastfed four children, some with more success and support than others, I know firsthand what an accomplishment breastfeeding can feel like. It’s no wonder that I’ve developed a passion for capturing those bonding moments for others.

During World Breastfeeding Week in 2013, I had the idea to photograph women breastfeeding in public places, and so the Public Breastfeeding Awareness Project (PBAP) was born. I was intimidated to nurse in public when I had my babies, so I did some research to find out in which places moms felt the most uncomfortable breastfeeding. I then put out a model call and photographed about a dozen moms in these “uncomfortable” places. The response was fantastic. The images generated conversations both positive and negative, but most importantly informative. Mothers who had never felt comfortable nursing in public suddenly felt empowered to do so. Mothers who had previously thought a woman should go someplace private to breastfeed opened their minds to the idea that there was nothing to be ashamed of. Women whose children had grown up, and even women who didn’t have any children at all, chimed in with their support.

In 2014 I felt that the impact of my project could be bigger. I decided to recruit photographers from around the world to join me in making PBAP more of a global initiative. Within just a couple months I had nearly 50 photographers committed to the project, representing cities all over the US, as well as a few photographers from other countries. We pressed forward with this famous quote from cultural anthropologist Margaret Mead in mind: “Never doubt that a small group of thoughtful, committed citizens can change the world. Indeed it is the only thing that ever has.” We agreed that we would share images from our sessions during World Breastfeeding Week using the hash tag #PBAP2014. Before the week was over, we were headlining at The Huffington Post and Redbook Magazine, as well as in several other parenting blogs and news sources.

The impact PBAP has made on the parenting community has been significant. Considering how quickly word spread about the project and how many moms agreed to be photographed (I alone photographed roughly 40 women), I am guessing this voice really needed to be heard. During pregnancy, into labor and through birth, mothers receive so much support from care providers, friends and family. That support declines once baby arrives. By empowering and encouraging mothers to breastfeed on demand wherever that may be, we are extending the love and support they need beyond birth. By illustrating how normal it is to breastfeed in public, we are helping moms reach their breastfeeding goals more easily; and by accepting different methods of feeding, whether covered or uncovered, by bottle or by breast, we are applying the belief that informed moms should feel free to do whatever makes them comfortable and happy. When a woman feels support, she feels most empowered.

Breastfeeding can be a real challenge. Prematurity, serious health conditions, digestive allergies, latch issues, tongue ties, lip ties, supply issues, plugged milk ducts, mastitis, thrush and returning to work are just a few of the hurdles mothers face. I’ve had the privilege, because of this project, to document a few special circumstances, such as a mother who uses a wheelchair participating in a large group photo in front of the skyline in downtown Austin. She was in a terrible car accident after she had already signed up to both model for me and be a photographer herself. Her breastfeeding relationship was cut short due to complications from the accident, and she told me she didn’t think she was a good fit for the project anymore. I told her to come anyway to honor the dedication she had to breastfeeding her now 21-month-old for nearly 20 months. She deserved to be recognized just as all women who work hard to meet their breastfeeding goals deserve to be recognized and applauded. A few other mothers who participated had been exclusively pumping milk because their babies were born very sick and these babies were either fed by tube, bottle or cup in the photos. Mothers who needed to supplement due to supply issues participated as well. I even documented a milk donor shipping off her first 700 oz of breastmilk (with an ultimate goal to donate 20,000 oz). I wanted to include a variety of breastmilk-feeding mothers because the term breastfeeding implies that by breast is the only way for your child to take in your milk. Because of this, pumping moms often feel disassociated from the breastfeeding community.

It’s been amazing to watch this project grow and touch so many different people. I hope to continue to inspire more moms to feel confident with breastfeeding in public rather than hiding in restrooms or at home. By showing that breastfeeding happens in real life and by supporting it, we are empowering women as a whole. Our society continues to have barriers of confusion surrounding breastfeeding in public and promiscuity, society’s hyper-focus on the sexual nature of the woman’s body and the great divide between mothers who have had a successful breastfeeding journey and those who have not. We must all work together toward this goal of cohesion, not just as birth professionals, but as women. Breastfeeding is a relationship that is definitely worth celebrating.

Leilani Rogers has been a birth and breastfeeding photographer for nearly four years. She and her husband live in Austin, Texas, with their four children. Leilani is passionate about her work and grateful to take part in so many birth journeys. Leilani was Austin’s Best Birth Photographer 2013 and was winner of the People’s Choice Award in birthphotographers.com’s Image of the Year Competition 2014. photosbylei.com.

View all posts by Leilani Rogers

An Afternoon with Marsden