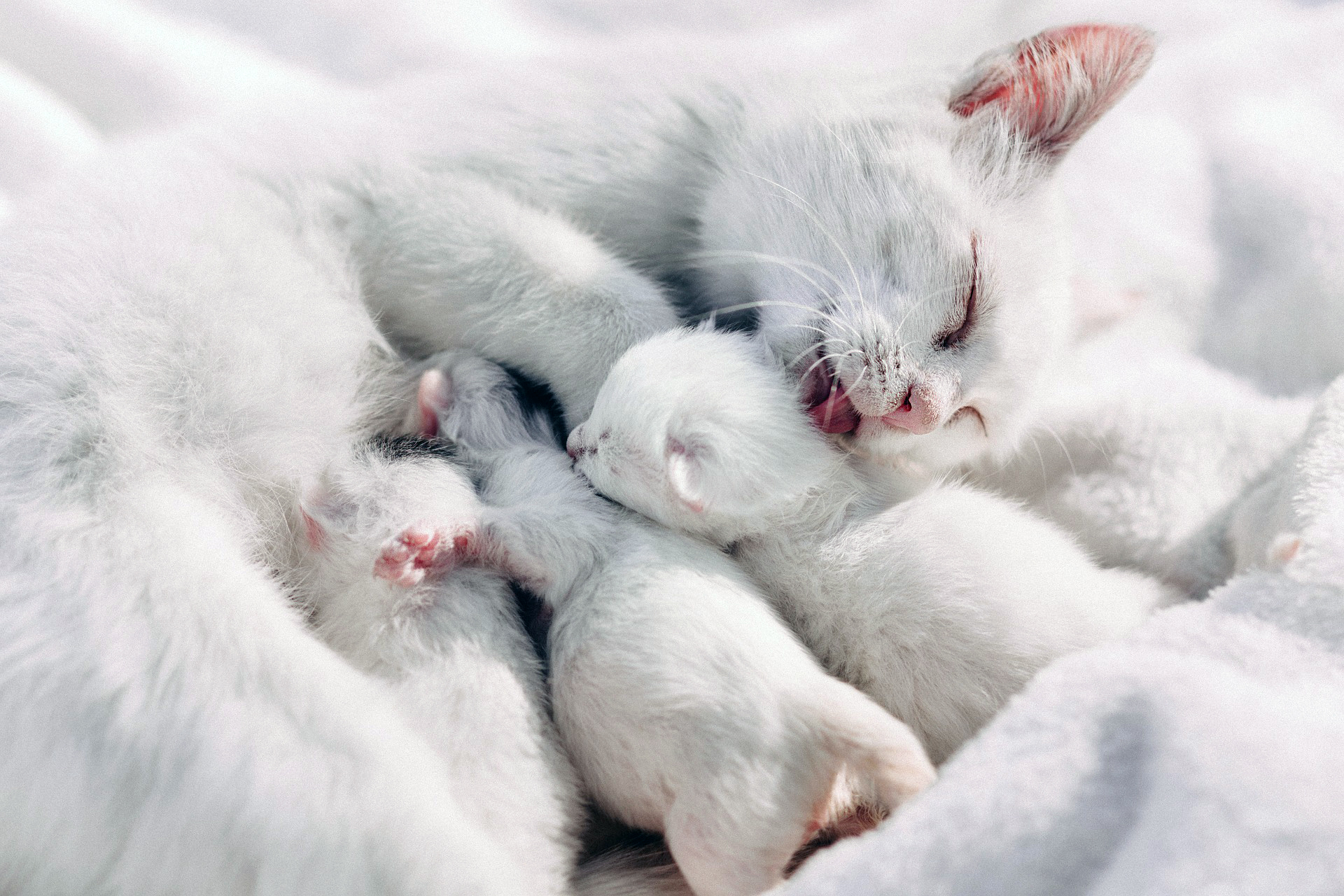 I went to a totally beautiful and undisturbed birth today. Five of them, actually! The mother had the most natural births as we looked on, not disturbing her but just being “with woman.” With woman—with kitty. Momma cat is used to Adam because she belongs to him, and I am a good friend of hers, as well, and she didn’t mind our presence at all. We watched as she had each kitten, ate each placenta in a gulp or two, and then slurped the cords like strings of spaghetti.

She was busy for two hours birthing, nursing, eating placentas, and cleaning babies. A kitten would emerge, she would clean it and eat the placenta, and soon another would come out. She would lick each kitten when it was part way out, pulling it gently from her. I noticed that cat birth smells like human birth. It must be the amniotic fluid and placentas mixed with membranes and a little blood. There wasn’t the lavender or ginger smell used for hot packs though! Afterwards she nursed her kittens and they all rested on an oxytocin high.

This was a great reminder of how simple and straightforward birth can be. As midwives, Adam and I had our worries about her pending birth, because she presented many “risk factors.” She is a young and very small Bombay cat. Her age and size worried us, as she was huge and seemed overdue. Unlike her, the father was gigantic—another risk factor. When she went into labor we heard barely a sound other than the mewing of kittens as they were born and began looking for nipples. We took turns sitting with her and watching quietly, but not knitting as Michel Odent would have us do—we don’t know how to knit!

As she ate the placentas I realized that I have never heard of a cat, goat, or dog hemorrhaging to death or even suffering too much blood loss. Humans have been so foolish in not following God’s plan, and we have probably sacrificed millions of women to hemorrhage over the last century when the cure was and still is right there within her body. I asked how many midwives had used placenta for hemorrhage control and how it worked. Everyone who had tried it said it stopped the hemorrhage immediately. Generally they just used a small quarter- size piece in the mom’s cheek. For bleeding while the placenta is still in, Gail Hart recommended using a bit of membrane or having mom suck on the cord, and both apparently have more oxytocin and other hormones in them than the placenta. I came to consider that if we use the placenta, membranes and cord as anti-hemorrhage agents that would make “active management of the third stage of labor” obsolete (see my editorial on this subject: midwiferytoday.com/articles/imicm.asp). Placenta is a natural part of the birth process, and using it reduces the chance of exposing motherbaby to the dangers of drugs like Cytotec and Pitocin. Let’s get this concept out to the world because we may be able to save many mothers if we do!

All this reminded me of a story I heard from one of the traditional midwives who came to a Midwives Alliance of North America (MANA) conference. She told me that in her grandmother’s time, at least 100 years ago, women would have their babies with little fuss and usually in just a few hours. Her grandmother lived in Mexico, but this probably applied to women in many parts of the world. What have we done to birth? Good prenatal care should not be undermined by needless interventions. It is unfortunate to see so many aspects of birth as high risk when, as Sister MorningStar and I have said, the process is all about relationships. Most midwives I know believe that 90% of complications can be averted with good prenatal care. A woman deserves to be nurtured with love and care, but it is her birth and you are an honored guest if she allows you to be there. We must change the paradigm of birth by accepting that every motherbaby has the right to loving care and respect in pregnancy, birth and beyond. Let’s show women the consideration we give mother cats and kittens. Believe me, Momma cat received lots of love and attention in her pregnancy, and it showed in her beautiful births.