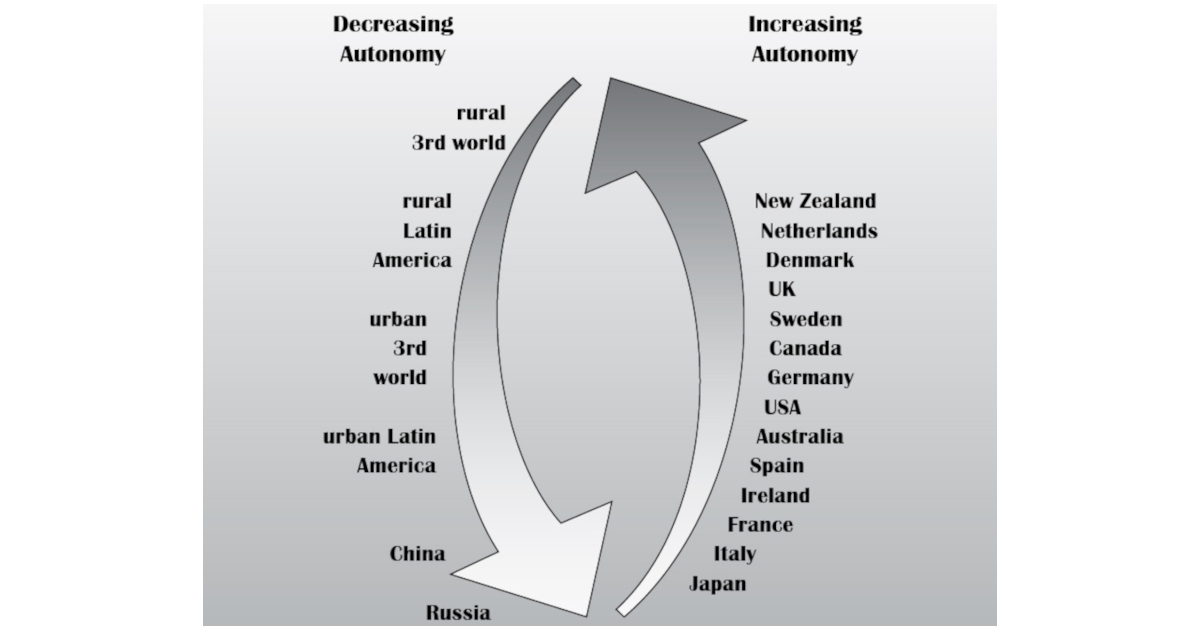 We Americans are consumed with the need to believe that we are number one. But here’s a wrenching fact: 41 countries have better infant mortality rates than the US. (The World Fact Book, www.cia.gov/library/publications/the-world-factbook/) In 2002 our infant mortality rate went up, not down.

What about these infants’ mothers? Women in the United States are 70% more likely to die in childbirth than women in Europe. Although we are in no position to export our style of health care, finding examples in many countries where we have influenced the way of caring for pregnant and birthing women and their babies is not hard.

The Global Evolution of Birthing Practices

Two hundred years ago midwives were autonomous care providers who assisted women during childbirth. Essentially, the woman and midwife worked together without outside interference. Then as men and doctors began to interfere in childbirth and childbirth came under the control of doctors and hospitals, both the woman and the midwife gradually but surely lost more and more of their autonomy. Under this model, birthing women are no longer allowed to decide what happens during their pregnancy and birth and midwives are nothing more than slaves to the doctors. Today, urban areas in developing countries are in this early part of the evolution of maternity care. This is what one sees in those parts of the world where the West has been able to penetrate, such as big cities and in places like China, Russia and much of Latin America, where they are so eager to be “modern.”

When the more highly developed countries reach the bottom—the point in the evolution of maternity care where birthing women and midwives have absolutely no autonomy—something extraordinary happens. When things get really bad and women’s reproductive freedoms are abused severely enough, some precipitating factor or factors finally make women and midwives sufficiently angry to take action. Then a long, difficult process of regaining their autonomy begins.

To Americans used to thinking of themselves as number one, the position of the US in the circle of evolution of birthing practices may come as a surprise. While women in the US have made enormous strides in their status in society, when it comes to maternity services, American women have made little progress.

The most recent women’s movement in the US focused on the workplace and economic equality. It also placed emphasis on knowing one’s body and on certain women’s health issues, such as cervical and breast cancer, and eating disorders. All of these issues are very important but, for whatever reasons, the women’s movement in America has unquestionably neglected issues of maternity care. As a result, today in the US many pregnant women are still too willing to put themselves in the hands of doctors and say: “take care of me.”

Consequently, pregnant and birthing women in the US have limited information and limited choices, and their sisters, the midwives, also have little autonomy—hence the ranking on the circle of evolution. One of the main reasons that obstetrics in the US is out of control in terms of excessive unnecessary interventions is because obstetricians do not have the restraining influence of a strong midwifery profession found in other industrialized countries.

When developing countries adopt Western obstetric practices that are not evidence-based, women there who are not pregnant die of cancers not found early enough because essential screening programs, especially for poor women, are not considered a priority or glamorous enough to fund.

As countries proceed up the circle of evolution of birth practices, and women and midwives gain more and more autonomy, they move to humanize birth. Humanizing birth means understanding that the woman giving birth is a human being, not a machine and not just a container for making babies. Declaring that women—half of all the population—are inferior and inadequate, by taking away their power to give birth, is a tragedy for all of society. On the other hand, respecting women as important and valuable human beings and making certain that their experience while giving birth is fulfilling and empowering is not just a nice extra, it is absolutely essential to making them strong and, therefore, making society strong.

Birth has been taken from the community and slowly but surely changed into hospital-based care during the last hundred years. In humanized birth, the care is given back to the community—back to the woman and her family. Doctors are human; birthing women are human. Countries where birthing practices have evolved into more humanized care have developed systems, with certain criteria, that might be called postmodern maternity services. (See sidebar.)

New Zealand, the Netherlands and Scandinavian countries, among others, have maternity care systems that, while by no means perfect, fulfill most of these criteria. Developing countries should be importing their way of birth rather than the American way.

Other countries, including the US, have achieved some of the criteria and continue working on other criteria in their struggle up the circle of evolution of birth practices.

Though I Walk Through The Valley …