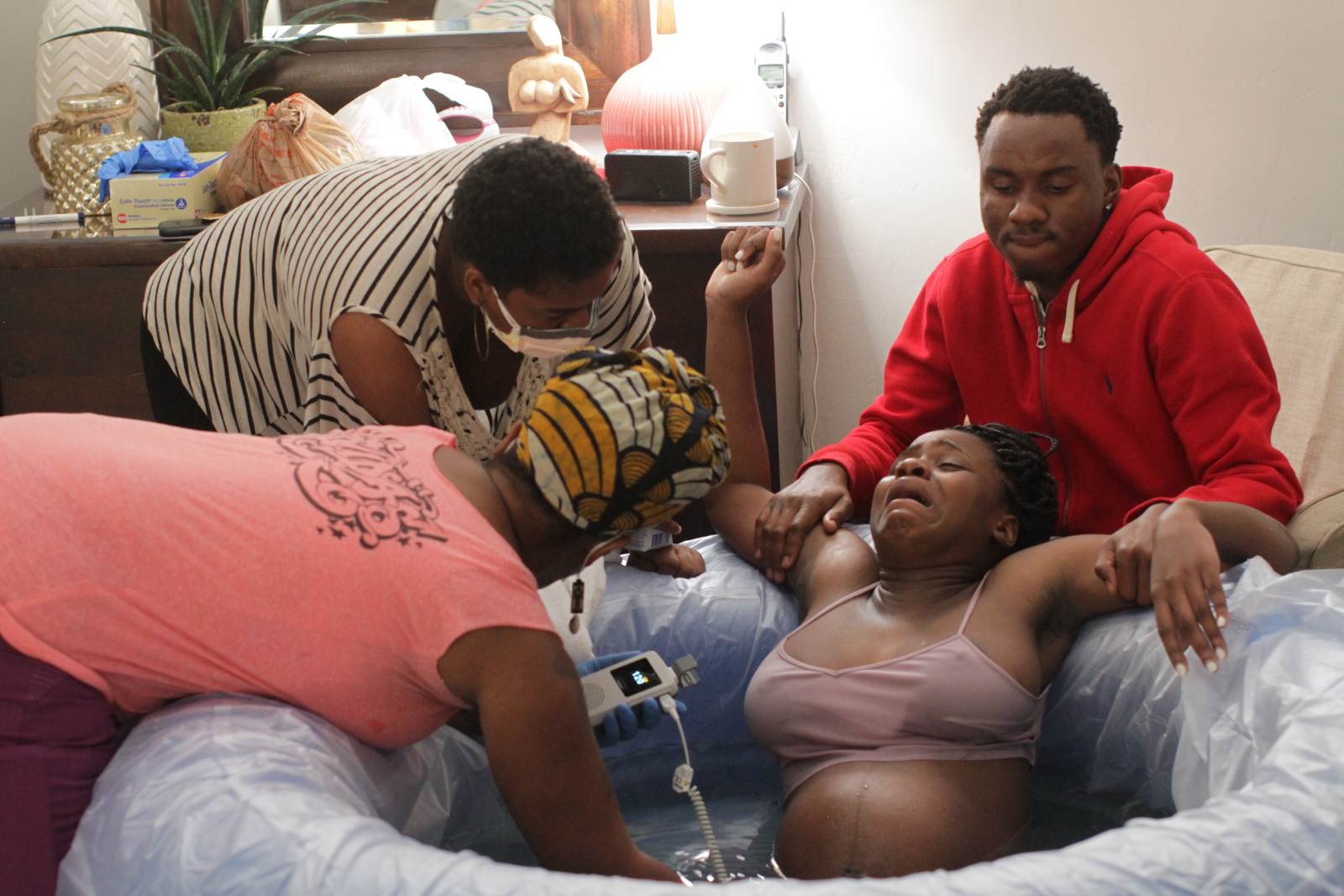 “There are a lot of traditional birthing customs that were lost throughout the years. Not only did we lose a part of our culture during slavery, but we lost a lot when our foremothers, grandmothers, and our great grandmothers started having their babies in the hospital. The mother wit that would normally be passed down discontinued because our grandmothers, forced with spinal taps or twilight, no longer had a story to tell.”
—Iya Sarahn Henderson, Community Midwife

In March of 2020, as the brutality of two pandemics, Covid-19 and police violence, were devastating Black communities across America, I thought about how midwifery models of care offer deep mother wit and wisdom to answer the problems facing society. It occurred to me that if everyone had the opportunity to sit at the feet of those who have dedicated their lives to “catchin’ babies,” how profoundly and beautifully we could begin healing this world. And now, with the development of Legacy, Power, Voice: Movements in Black Midwifery, an upcoming docuseries that will break new ground, everyone will have that chance.

Making a documentary about Black midwives has been a dream of mine for several years. This is a special project to me because I am a midwife and I also I had three of my four babies with midwives, including two homebirths after a traumatic hospital birth. I know from both sides how deeply midwives impact families and communities. With Legacy, Power, Voice, I am producing my first documentary and working with talented director and videographer, Karyl-Lyn Sanderson. The film is the project of National Black Midwives Alliance, which I co-founded with Haguerenesh Tesfa in 2018. We have managed to assemble an amazing team of people who are helping to tell the stories of many Black midwives. We have interviewed eight midwives and three client families so far; this is just the beginning. I am excited to grow mentally, professionally, and spiritually with my team in this way and to add my name to the short list of midwives who also make movies.

Saturday, December 12, 2020, at 7pm EST, National Black Midwives Alliance will showcase a short segment of the forthcoming documentary and feature a panel of grand midwives who will share the wisdom of their experiences with the audience. There will be live entertainment, a tribute to some of the esteemed elders, and a silent auction to raise money for the completion of the project. This is a virtual event that will help us to engage the community, build awareness, and raise funds to support the self-sustainability of the project; all are welcome.

Legacy Power Voice: Movements in Black Midwifery intimately explores the evolution of Black birthing traditions in America by giving voice to the traditional caretakers of the Black community. The film focuses on Georgia and Florida, as states where Black midwives have flourished even while enduring intense legal battles with the state and medical community and repression by their white peers. By highlighting the voices and stories of these powerhouse midwives, viewers witness the racial, political, and cultural contexts that have shaped midwifery movements in the South. This documentary acknowledges the devastation of medical abuse, provokes conversations about bodily autonomy and self-determination and expands our collective understandings of reproductive health and birth justice.

Centering Black midwives means shifting from a narrative of abuse to focus on the wellness and resilience of Black women and families. Obstetric violence is rooted in the minds and bodies of Black women through the legacies of ancestors like Anarcha, Betsy, and Lucy—the involuntary “mothers of gynecology.” Physicians such as J. Marion Sims used Black bodies for experimentation, in the name of medical advancement and often to the detriment of his patients such as Anarcha, who was subjected to over 30 surgeries with no anesthesia.

In post-slavery America, there were many barriers to accessing medical care and there was also significant distrust of doctors and the medical establishment. Midwives were systematically removed from Black communities by white doctors like Sims and their powerful allies, in favor of reducing the birth experience to a sterile biological event that can only happen in hospitals. Becoming a mother/parent is about more than physiology. Midwives understand the importance of people-centered education, participatory health care, holistic health and nutrition, intergenerational family healing, and autonomy over one’s own body. Traditionally, midwives have represented a safe place for Black families, literally holding the community’s future in their hands.

There are so many untold stories about midwifery in African American communities. Foremothers like Lucrecia Perryman, Biddy Mason, and Gladys Milton served as both conduits for the transmission of cultural practice as well as for innovation in the interest of survival. The practice of Sankofa—reclaiming our story and carrying our ancestors forward with us—is a collective responsibility. In doing this vital work, Legacy, Power, Voice is a grassroots labor of love.

The website for the documentary is www.legacypowervoice.org. Check out the trailers on the homepage: “Behind the Scenes of Legacy” and “Grand Midwives of Georgia.” Your energetic investment is as important as your monetary one to help us bring this film to life. You can purchase tickets for the Saturday, December 12 screening and fundraiser at www.legacypowervoice.org/tickets. Tickets are $25 general admission, $100 VIP.

Jamarah Aman, LM, is a community midwife. An award-winning activist, Jamarah’s mission is to do her part to build a movement for Birth Justice locally, nationally, and globally. Jamarah offers midwifery care to families across South Florida and workshops on Birth Justice to organizations across the United States. She is the Executive Director of the Southern Birth Justice Network, the parent organization of the National Black Midwives Alliance, which she also co-founded. Jamarah is currently producing her first documentary.

View all posts by Jamarah Amani