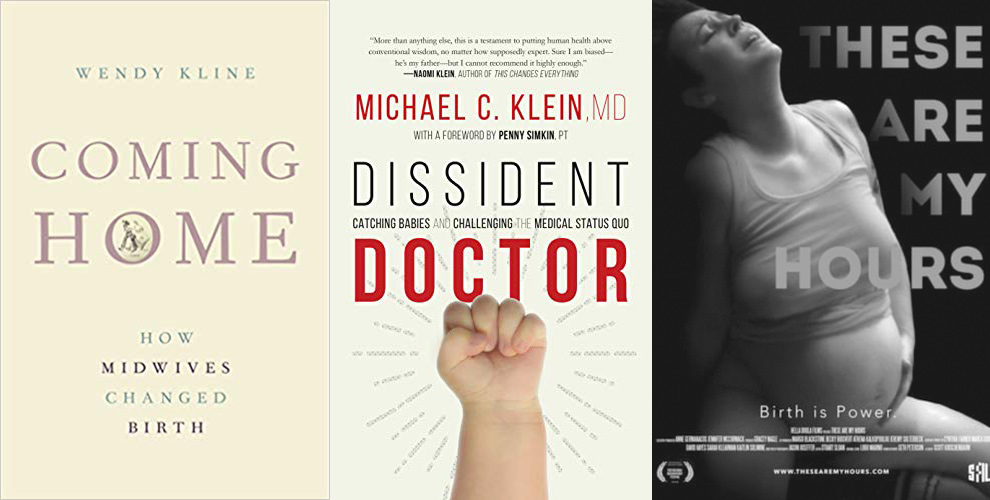 They say you can never go home, and for longtime midwives and veterans of the US homebirth movement, reading Wendy Kline’s Coming Home may feel as complicated as a family reunion. On one hand, filled with the pure joy of shared nostalgia and pride, and on the other, with the discomfort of confronting old feuds and wounds.

Kline offers a rich and complicated history of direct entry midwifery and the twentieth-century American homebirth movement through multiple narratives. The most surprising begins in Chicago with Joseph DeLee, the obstetrician famous for denigrating midwives and advancing “prophylactic forceps” and episiotomy. Yet DeLee also advocated better obstetric training, and women birthing at home provided the best “teaching material.” The Chicago Maternity Center, which he founded, facilitated thousands of homebirths between 1932 and 1977. As result, Kline writes, “Home birth continued to flourish in Chicago long after it had largely disappeared from other cities and before it returned as a countercultural practice.” And DeLee’s center launched several physicians who became steadfast allies to the homebirth movement in Chicago and beyond.

Kline’s immersive narrative crisscrosses the country, from Washington, DC, where the American Society for Psychoprophylaxis—what would become Lamaze—and the La Leche League seeded a movement of “respectable middle-class” women rejecting hospital birth, to Santa Cruz, California, where midwifery was more of a political act. The legality of its birth center was tested in court, forcing the defendant midwives to decide: were they practicing medicine? Their legal defense was that they were not.

In each chapter we meet early figures in the movement, with whom Kline sifted through boxes in basements and unearthed fantastic artifacts. Included were a flyer announcing a screening of the documentary Push: A Women’s Western—which cemented the distinctly American archetype of the “outlaw midwife”—to an original copy of Pregnancy, Childbirth and the Newborn—a manual compiled by a physician and two nurse-midwives around 1950 to train midwives in rural China. This booklet found its way to different countries after being translated into several languages and showed up in a health food store in the Haight Ashbury circa 1969. The Santa Cruz midwives had a copy, as did the hippie Caravan: Ina May Gaskin turned to it after the community’s first complicated birth.

At the core of Kline’s thesis is that in each locale where women were called into midwifery, they collaborated with physicians. These women saw childbirth as requiring much more than medical technology, yet they recognized it had its place, and thus sought out or welcomed unsolicited supportive medical advisers and teachers.

Kline takes the reader to key meetings and moments, such as the first international conference of practicing midwives in El Paso, Texas, in 1977; the first classes of the Seattle Midwifery School in 1979—held at the Pike Place Market; and “dialogue day,” a historic meeting of four nurse-midwives and four direct entry midwives in 1981, which led to the founding of the Midwives Alliance of North America.

These meetings were often thrilling but never easy. The same difficult issues resurface again and again and continue to this day: how to establish credibility without giving up autonomy; how to organize without replicating the disempowering hierarchy of medicine. Navigating these questions, argues Kline, will only be found with “true engagement [and] awareness of the historical framework from which these debates originated.”

Midwives know how it goes: you get invited to be a speaker on a panel for a homebirth movie or decide to host a screening of a midwifery movie, and who shows up? Maybe a handful of women who are actually seeking midwifery care, but more often you get the “preaching to the choir” crowd—the “birth junkie” set, including doulas, bodyworkers, midwifery students, and others. This is all good but it’s not really getting the message to those who need to hear it, is it?

When I was asked to cohost a screening of These Are My Hours this winter on the Outer Banks, I had the same thoughts and some reservations. The Outer Banks is a stretch of barrier islands off the coast of North Carolina. The year-round population is about 40,000, and the only permanent option for birth on these islands is one small Ob/Gyn practice that holds the typical birth monopoly where they do all the births for the community (save the very few who have a homebirth with me once in a blue moon).  The last time I checked, that practice’s cesarean rate was well over 30%, they did not hire midwives, and they did not attend VBACs.

Consequently, I wondered: Who is going to show up for this film in that environment? As a result, I was pleasantly surprised to see that the majority of the more than 25 or so folks who showed up were expecting couples—and they loved the film!

This film is not for the birth junkies; this film is for the mothers. It is pure, raw, and unedited. This is the first film about birth I have seen that is filmed from the mother’s perspective. Not the celebrity narrator, not the midwife, not even the partner—just the mother. The feedback from mothers in the audience was nothing but positive (and mind you, most of these women were planning a hospital birth, not a homebirth). They said they felt empowered, encouraged, and blessed to have seen a woman give birth on her terms.

Every woman of childbearing age should see this film. Seriously. A screening of it should be a requirement for every women’s studies course in our universities; it should be seen by women of all ages, backgrounds, belief systems, and cultures. It transcends everything people may think they know about normalcy of birth, the sacredness of motherhood, the strength of womanhood, and the importance of that immediate intimate bond between mother and newborn.

This film is not to be missed. I am hoping to show it again, again, and again. Shout it from the rooftops: Women can have birth uninterrupted!

This interesting memoir helped me through a two-day power outage when I had no other distractions (other than trying to stay warm). From his early years with a union organizer mother and a cartoonist and left-wing father, through the Vietnam War years (when he moved to Canada), to his long, well-traveled, and varied career, I found the book fascinating and very relatable. Dr. Klein’s experiences around the globe informed his work in medicine and the birth world and showed him the advantages of midwifery, among other things. During his formative years as a doctor he played a role in the development of family practice as a specialty—to his patients’ benefit. He shares details of many research projects dealing with maternity care, a medical condition that affected his wife and their life together, and other experiences that informed his remarkable life and career. I won’t give it all away so you can read for yourself. I promise you will enjoy it.

Jennifer Block is an award-winning journalist whose work has appeared in The Washington Post Magazine, Pacific Standard, Newsweek, Babble, The Cut, and many other publications. She is the author of Pushed: The Painful Truth about Childbirth and Modern Maternity Care (2007) and Everything Below the Waist: Why Health Care Needs a Feminist Revolution (St. Martin’s Press, July 2019).

Deb Fiore lives in North Carolina with her wife and adult children. She owns Carrboro Midwifery, a small homebirth practice. She is a staunch believer that “peace on earth begins with birth” and that women can and should give birth “on their terms,” whatever that is for the individual woman and her family.