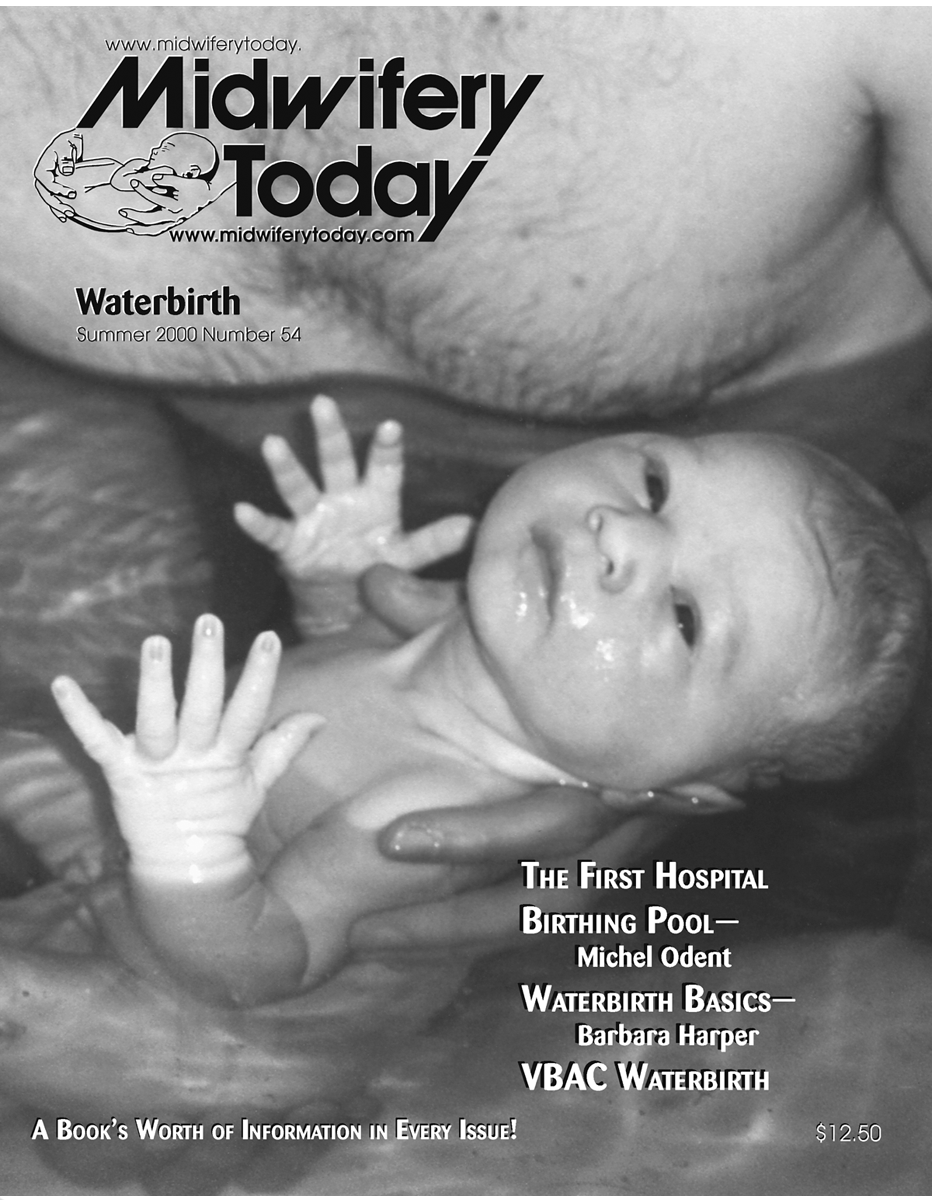 What’s so special about waterbirth? Why are more and more women wanting to experience this way to give birth? How can you bring waterbirth into your birthing practice or improve the waterbirths you are already doing? Read Midwifery Today Issue 54, dedicated to the theme “Waterbirth,” to learn more about this gentle form of birth.

Read Birth at Sea, a poem about waterbirth, by Holly Knight.

What’s so special about waterbirth? Why are more and more women wanting to experience this way to give birth? How can you bring waterbirth into your birthing practice or improve the waterbirths you are already doing? Read Midwifery Today Issue 54, dedicated to the theme “Waterbirth,” to learn more about this gentle form of birth.
Read Birth at Sea, a poem about waterbirth, by Holly Knight.

Question of the Quarter

What is your favorite waterbirth story?

Concerned about the baby inhaling water at the time of birth? In “Waterbirth Basics,” Barbara Harper, RN explains factors that prevent this from happening: “When the baby is born and the prostaglandin level is still high, the baby’s muscles for breathing simply don’t work, thus engaging the first inhibitory response.”

She also discusses changes in waterbirth protocols as we learn more about the safety of this birthing method: “Now the universal practice is to not even feel for a cord in waterbirth, unless there has been a very slow second stage and you are afraid of cord compression. No attempt is made to clamp and cut the cord.” Other topics in this informative and referenced article include how a newborn’s first breath is initiated, outcomes and concerns, when to enter the water and the midwife’s influence.

Discover the importance of what was learned from the first births in hospital birthing pools, in “What I Learned from the First Hospital Birthing Pool,” by Michel Odent, M.D.: “At the time of the paddling pool… women were not influenced by the media or by what they read in books about childbirth. Their behavior was unpremeditated. This phase of the history of childbirth was ideal to learn about the genuine effects of a watery environment.”

Then, in “A Landmark in the History of Birthing Pools” Dr. Odent discusses an important and authoritative study published in the British Medical Journal on August 21, 1999. He explains the methods and results of this study, and then gives updated recommendations based on the study’s outcomes: “The first practical recommendation is to give great importance to the time when the laboring woman enters the pool.”

As always, the heart of midwifery is found in the personal birth stories where mothers and midwives share their experiences: “I began to come to terms with my labor and decided to manage it by letting it manage me,” Traci Coburn tells us in “The Waterbirth of Maggie Cate.”

In “Waterbirth, A New Beginning” Carolee Hall remembers: “The water washed something away from the contraction—it no longer possessed the intense power that had been there just a moment before….Contractions flowed as smoothly over my body as the water.” And read the story of a “VBAC Waterbirth” by Cathy O’Bryant, CPM: “My favorite waterbirth story is about a very special woman who decided early in her pregnancy that she was going to have the birth she wanted—a VBAC waterbirth—even after she found she was expecting twins.”

Birth Around the World

Sara Wickham and her grandmother Peggy Lee talk about birth in the United Kingdom 60 years ago in “And That Was That!” Peggy had four children of her own and also helped the local midwife with births. Sara asked her if she’d ever seen problems: “I never had any with all those problems. I think myself they were born more naturally in those days than they are today….I think it was because women weren’t scared.”

In “Assignment: Somalia,” Rondi Anderson, CNM tells us about birth and life in this country without a government: “To the Somali people, childbirth is a woman’s domain. Men are not involved, not even the husband, but there is very good female support. Childbirth is seen as a difficult passage, impossible for women to get through without aggressive management by midwives.” And Chaya Raizel Breger tells us what happened in her “Birth Surprise in Jerusalem” : “I had had no labor, no warning. I couldn’t fight the urge to push, so I quickly put a towel on our bed, lay down on my side and simply let my body work.” You’ll also be able to read about the effect of pregnancy and birth on Muslim families, plus articles about birth in Armenia, Spain, France and Jamaica.

Let Midwifery Today help you bring the heart back into your practice!

The Death of a Childbearing Black Woman